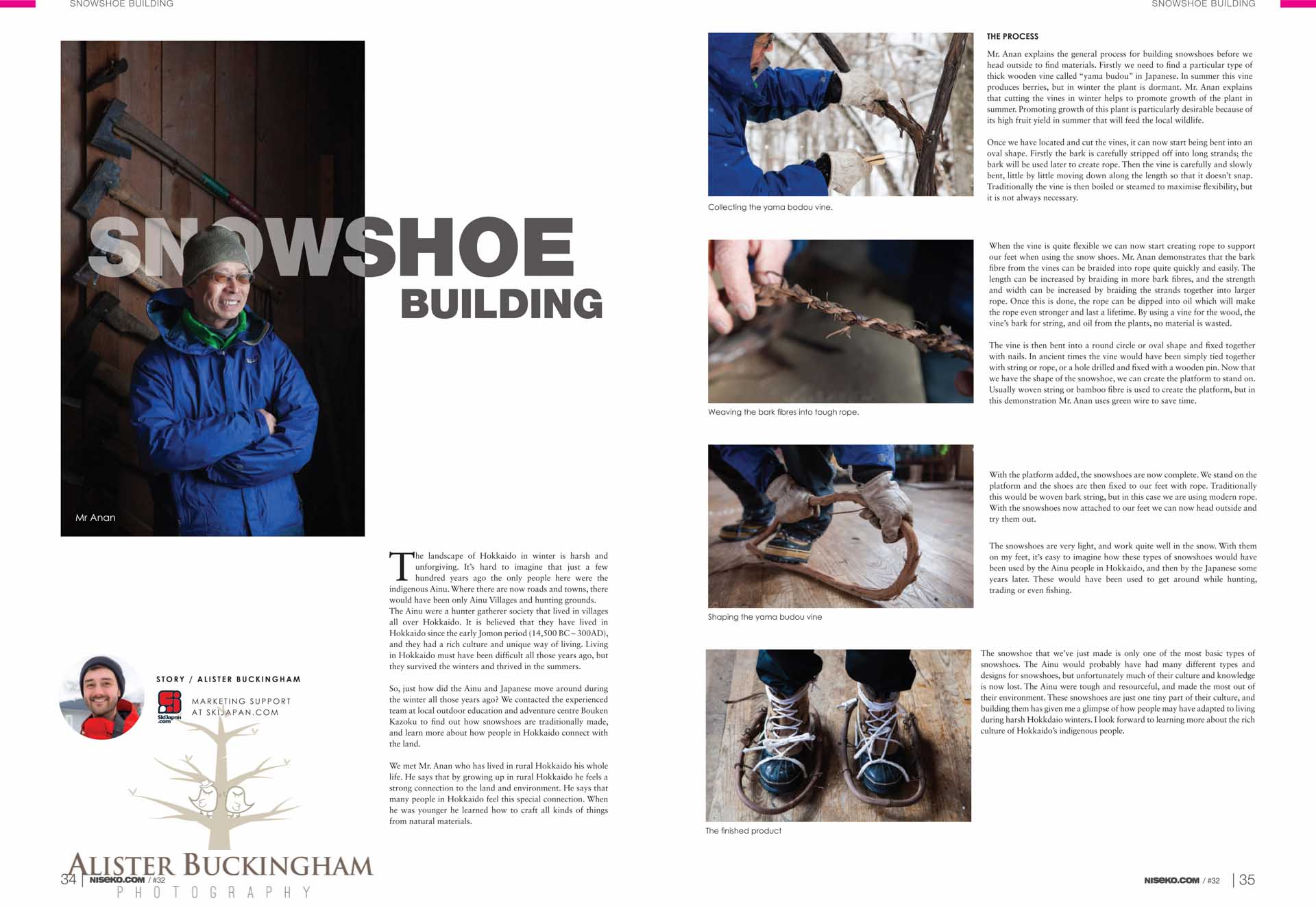 The landscape of Hokkaido in winter is harsh and unforgiving. It’s hard to imagine that just a few hundred years ago the only people here were the indigenous Ainu. Where there are now roads and towns, there would have been only Ainu Villages and hunting grounds.

The Ainu were a hunter gatherer society that lived in villages all over Hokkaido. It is believed that they have lived in Hokkaido since the early Jomon period (14,500 BC – 300AD), and they have a rich culture and unique way of living. Living in Hokkaido must have been difficult all those years ago, but they survived the winters and thrived in the summers.

So, just how did the Ainu and Japanese move around during the winter all those years ago? We contacted the experienced team at local outdoor education and adventure centre Bouken Kazoku to find out how snowshoes are traditionally made, and learn more about how people in Hokkaido connect with the land.

Mr. Anan explains the general process for building snowshoes before we head outside to find materials. Firstly we need to find a particular type of thick wooden vine called “yama budou” in Japanese. In summer this vine produces berries, but in winter the plant is dormant. Mr. Anan explains that cutting the vines in winter helps to promote growth of the plant in summer. Promoting growth of this plant is particularly desirable because of its high fruit yield in summer that will feed the local wildlife.

Once we have located and cut the vines, it can now start being bent into an oval shape. Firstly the bark is carefully stripped off so that it stays in long strands; the bark will be used later to create rope. Then the vine is carefully and slowly bent, little by little moving down along the length so that it doesn’t snap. Traditionally the vine is then boiled or steamed to maximise flexibility, but it is not always necessary.

When the vine is quite flexible we can now start creating rope to support our feet when using the snow shoes. Mr. Anan demonstrates that the bark fibre from the vines can be braided into rope quite quickly and easily. The length can be increased by braiding in more bark fibres, and the strength and width can be increased by braiding the strands together into larger rope. Once this is done, the rope can be dipped into oil which will make the rope even stronger and last a lifetime. By using a vine for the wood, the vines bark for string, and oil from the plants, no material is wasted.

The vine is then bent into a round circle or oval shape and fixed together with nails. In ancient times the vine would have been simply tied together with string or rope, or a hole drilled and fixed with a wooden pin. Now that we have the shape of the snowshoe, we can create the platform to stand on. Usually woven string or bamboo fibre is used to create the platform, but in this demonstration Mr. Anan uses green wire to save time.

The snowshoes are very light, and work quite well in the snow. With them on my feet, it’s easy to imagine how these types of snowshoes would have been used by the ancient Ainu people in Hokkaido, and then by Japanese some years later. These would have been used to get around while hunting, trading or even fishing.

The snowshoe that we’ve just made is just only one of the most basic types of snowshoes. The Ainu would probably have had many different types and designs for snowshoes, but unfortunately much of their culture and knowledge is now lost. The Ainu were tough and resourceful, and made the most out of their environment. These snowshoes are just one tiny part of their culture, and building them has given me a glimpse of how people used to live. I look forward to learning more about the rich culture of Hokkaido’s indigenous people.