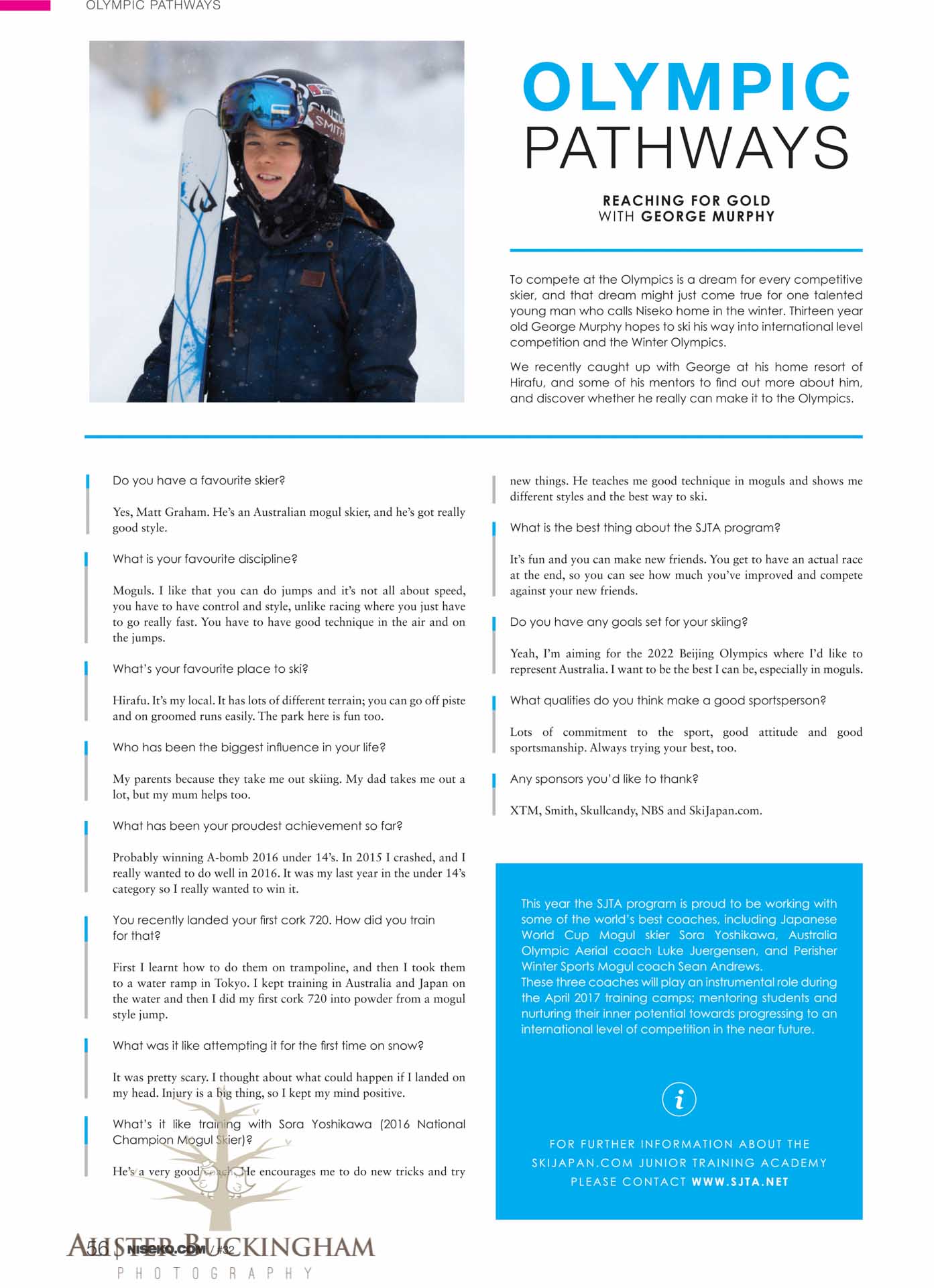 To compete at the Olympics is a dream for every competitive skier, and that dream might just come true for one talented young man who calls Niseko home in the winter. Thirteen year old George Murphy hopes to ski his way into international level competition and the winter Olympics.

We recently caught up with George at his home resort of Hirafu, as well as some of his mentors to find out more about him, and find out if he really can make it to the Olympics.

Do you have a favourite skier?

What is your favourite discipline?

Moguls. I like that you can do jumps and it’s not all about speed, you have to have control and style, unlike racing where you just have to go really fast. You have to have good technique in the air and on the jumps.

What’s your favourite place to ski?

Hirafu. It’s my local. It has lots of different terrain; you can go off piste and on groomed runs easily. The park here is fun too.

Who has been the biggest influence in your life?

My parents because they take me out skiing. My dad takes me out a lot, but my mum helps too.

What has been your proudest achievement so far?

You recently landed your first cork 720. How did you train for that?

First I learnt how to do them on trampoline, and then I took them to a water ramp in Tokyo. I kept training in Australia and Japan on the water and then I did my first cork 720 into powder from a mogul style jump.

What was it like attempting it for the first time on snow?

It was pretty scary. I thought about what could happen if I landed on my head. Injury is a big thing, so I kept my mind positive.

He’s a very good coach. He encourages me to do new tricks and try new things. He teaches me good technique in moguls and shows me different styles and the best way to ski.

What is the best thing about the SJTA program?

It’s fun and you can make new friends. You get to have an actual race at the end, so you can see how much you’ve improved and compete against your new friends.

Do you have any goals set for your skiing?

Yeah, I want to try to make the Olympics and do well. I want to be the best I can be, especially in moguls.

What qualities do you think make a good sportsperson?

Lots of commitment to the sport, good attitude, good sportsmanship. Always trying your best too.

I’m aiming for the 2022 Beijing Olympics where I’d like to represent Australia.

When asked about how he has come this far, Paul Lorenz (NBS Ski School Director) said “Through the SJTA program here in Japan, George has been mentored and coached by Japanese World Cup Mogul skier, Sora Yoshikawa. This season SJTA is also proud to be working Australia Olympic Aerial coach, Luke Juergensen and Perisher Winter Sports Mogul coach, Sean Andrews. These 3 coaches have played an instrumental role in George’s progress and we are lucky to have all 3 working with SJTA athletes in April.”

George’s father, Peter, and his coach, Sora, both agree that his future is bright. Peter said “It’s been amazing watching him grow as a skier. I didn’t expect him to do as well as he has. It’s come mostly from him. You can’t teach competitive spirit, and he drives himself; he commits himself to the sport.” When asked what George needs to do next, Sora said “He just needs to continue participating in competitions and learning from every tournament experience. He has all the necessary skills to compete at an international level, and with more experience he will grow even more.”

What do you think of George’s technical skills?

George has an incredible talent for skiing and is lucky to have parents that have the time and resources to nurture this talent. George has displayed very strong technical capabilities as an alpine skier in his younger years which built a strong foundation of ski technique. He has since switched focus to competitive mogul skiing which he is very passionate about has further strengthened his abilities as a skier.

Do you think that he could reach international or Olympic level competition?

I think George is an incredibly strong skier that has the potential to compete on an international level. George is still young but is showing all the necessary performance indicators to compete in that capacity in the future. He is talented, passionate, dedicated with access to some of the world’s best coaches in Australia and here in Japan.

What aspects of NBS and the SJTA (Ski Japan Training Academy) have been most helpful to George?

Through the SJTA program here in Japan, George has been mentored and coached by Japanese World Cup Mogul skier, Sora Yoshikawa. This season SJTA is also proud to be working Australia Olympic Aerial coach, Luke Juergensen and Perisher Winter Sports Mogul coach, Sean Andrews. These 3 coaches have played an instrumental role in George’s progress and we are lucky to have all 3 working with SJTA athletes in April.

Any advice would you give to George?

My advice to George would be to keep the love and enjoyment for the sport by having fun with skiing. Passion/drive for anything can be easily lost if you stop having fun.

As George’s coach, what has made you most proud of him?

I admire his strong mentality, his willingness to learn, and his ability to explore his own potential.

What steps does George need to take now in order to make it to the winter Olympics?

He just needs to continue participating in competitions and learning from every tournament experience. He has all the necessary skills to compete at an international level, and with more experience he will grow even more.

Do you think that he could reach international or Olympic level competition?

It will be easy for him. I already see the potential in him to become a medallist.

Have there been any moments where George has really impressed you?

Everyday! It’s exciting to ski with him and see what he will do each day, but it’s his attitude to training that I most enjoy. I think he is a wonderful athlete.

What qualities do you think every competitive skier should have?

The ability to listen to advice. If you try to do it alone, it is very difficult to stay mentally strong and win competitions. The advice of others will always help us to be stronger.

Any advice would you give to George?

If anything, it would be to keep enjoy skiing. I’ve been part of the Japanese national team for a long time, and it’s the fun and joy that keeps me going. Just have fun and aim for the top.

As George’s dad, what has made you most proud of him?

His commitment to training even on the worst days and his ability to handle pressure in competition situations. He understands that what he puts in the training he gets in results. All of the stuff he has achieved has all come through training in Australia and Japan; gymnastics, surfing, skateboarding all help him with his skiing career.

What’s your favourite thing about skiing with George?

He’s faster than me now so I can’t say that I like following him. I like boarding with him because I can still teach him stuff. When we ski together he teaches me stuff! I’ve learnt more about jumping through listening to George and his coaches.

Skiing in powder, his love for powder. Even though he is doing competition he still likes to get out there in the powder. He makes the most of the powder that’s available. It’s about being powder pigs together.

What impresses you the most about George?

His freakish gymnastic ability. He has really good spatial awareness. His skiing skill, edge, pressure and his ability to ski any type of terrain quite brilliantly with a good degree of aggressiveness and finesse. I’m impressed with his ability to balance his schoolwork and his ski training.

What has it been like seeing George grow and improve with his skiing?

It’s been amazing. I didn’t expect him to do as well as he has. It’s come mostly from him. You can’t teach competitive spirit, and he drives himself; he commits himself to the sport.

Got any favourite memorable moments with him?

Watching him winning the Niseko Super Bumps last year. Because it was a local hill, and it’s the first competition that he’s won here at home. And teaching him how to surf. Getting him into surfing was every bit as important to me as getting him in to skiing.

Which training programs have been most helpful to George?

I think SJTA was very helpful. Having Sora as a coach has been fantastic for George. Perisher Winter Sports Club’s mogul program has been very helpful as well.

What does George need do in order to compete at the Olympics and international level?