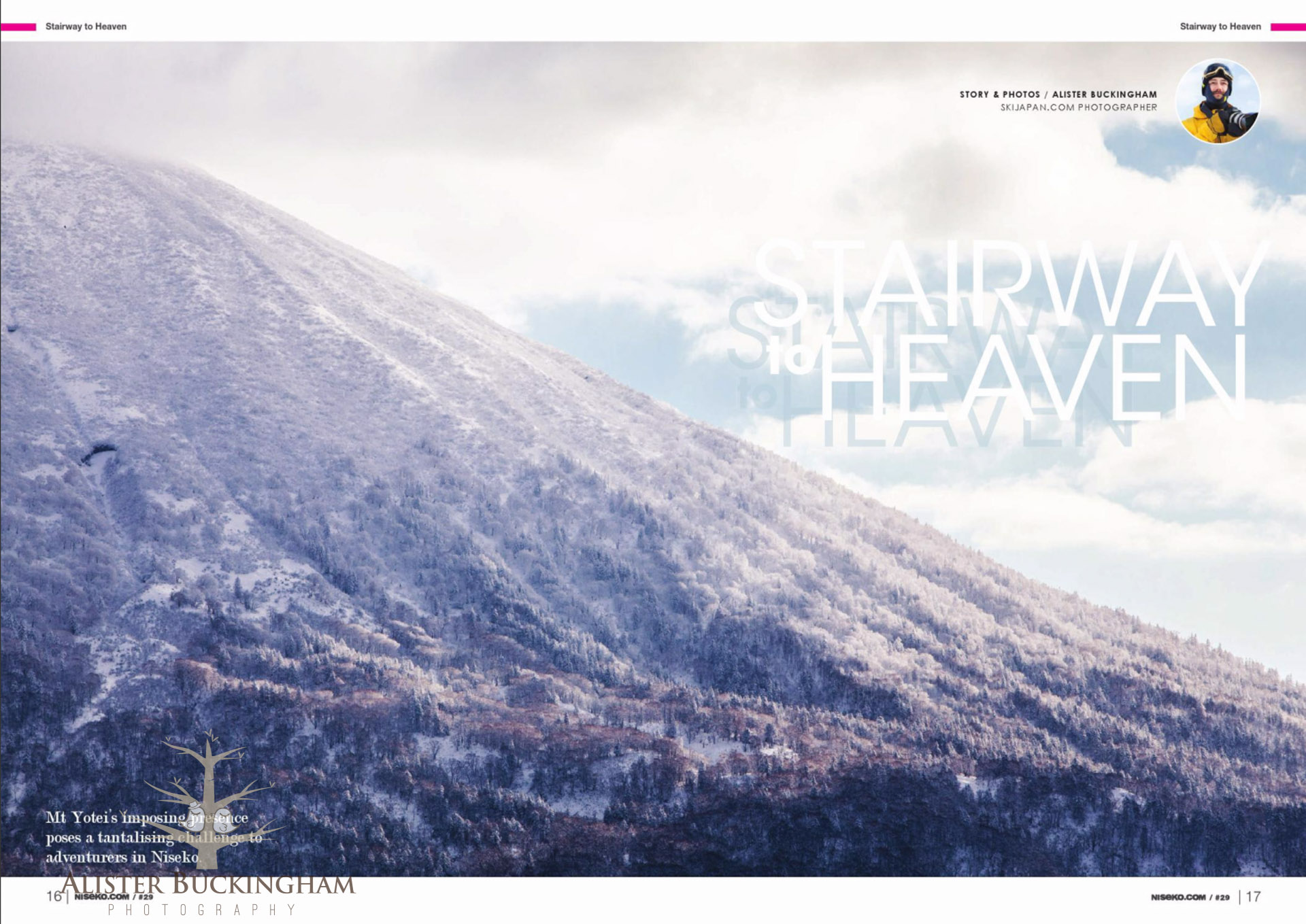 This was an article I wrote for Niseko.com Magazine Issue 29 | Feb/March 2016.

Yotei is arguably the most iconic piece of the Niseko landscape and was formed about 10,000 years ago by a constantly shifting volcanic landscape. At a staggering 1,898m above sea level, it towers above the surrounding vista. The volcano mountain last erupted from its summit around 5000 – 6000 years ago helping to shape the current landscape. Around 3000 years ago, Yotei erupted from its base, forming a small lake which is now called “Hangetsu-ko”, which translates to “Half Moon Lake”. Hangetsu-ko is a short walk from the main car park area at the base of Mt Yotei, and is achievable for hikers of any level. At its peak, Yotei has a large crater, formed by the earlier explosive eruption, which is about 140m deep. For most people that hike Yotei, the goal is to summit the peak and make the descent into the crater and then hike out again.

Mt Yotei is often called “Ezo Fuji” due to its resemblance to the more famous Mt Fuji in Honshu. In the local Ainu language, it is called “Machine Shiri”, meaning “Female Mountain”. 100 years ago, Japanese people named it “Siribeshi Yama” (後方羊蹄山) with the kanji translating to “The backside of Youtei”. Locals decided that the name was too similar to another nearby mountain known as “Shiribetsu Dake”, so the name was shortened simply to “Yotei” (羊蹄), which comes from the kanji that formed the original name of “Siribeshi Yama”.

I wanted to experience Yotei myself, so I joined Kentaro Hayashi and Sam Cadbury from NAC (Niseko Adventure Centre) for a hike up Niseko’s most famous mountain. NAC has been operating for over 20 years in Niseko and has some of the most passionate guides in the area. The NAC building also has a rock climbing area to keep fit when the weather is bad, and a large café.

Hiking mountains in Niseko, or anywhere for that matter, is not without its dangers. There is always the risk of avalanche as well as cracks, geothermic holes in the snow, and giant pillows of snow and ice falling from trees. Mt Yotei carries an especially high risk for avalanches because of its conical shape, and lack of snow anchorage above the tree line. Most of Yotei is avalanche prone terrain, and the general risk can be quite high. That all said, there are many ways to mitigate the risk while hiking.

NAC guide, Kentaro Hayashi, believes that one of the best way to improve safety in backcountry areas in Hokkaido is the collecting and sharing of snow pack and avalanche information. Kentaro will check the snowpack often and report his findings to the website, “Japan Avalanche Network” along with other local Japanese guides. Kentaro says the information shared is very valuable, but because it is in Japanese only it is very difficult for foreigners to access. While Kentaro translates all of his own reports into English, many other guides and volunteers who provide info online do not speak English and cannot translate their findings. Kentaro hopes that one day the “Japan Avalanche Network” will receive funding so that avalanche information can be accessed by all visitors to Japan and improve safety for everyone in backcountry areas.

We start the day by meeting at the NAC building in Hirafu (just down the road from Lawson) at around 8am. I meet the guides, Kentaro and Sam, and Kentaro points out our route on a topographic map, checks the current weather reports and then packs his backpack with all the necessary equipment for hiking. Kentaro includes ropes and rescue equipment as well as the all-important shovel and probe. We then make sure that our beacons are all turned on and working before we leave the building.

Kentaro chooses the Makkari course which is south east of Yotei. This course is considered the easiest for ski touring and split boarding because of the gentle incline. When we arrive at the base of Yotei in Makkari, there are many other hikers, both Japanese and foreign, all excitedly readying themselves and their gear for the ascent. I prepare my splitboard and attach skins, and after a few minutes we set off up the hill. There is a break in the clouds and the sun shines down on us from behind as we approach Yotei. I look up in hopes of seeing the peak above us, but in typical fashion, Yotei is completely shrouded in cloud.

We make quick progress as the trail has already been broken in by previous adventurers. The climb is very gentle for the first 5 minutes as we make our way through the Makkari campsite till we get to the treeline. A large sign welcomes us to the Yotei forest and we make our way in. The atmosphere is calm and has an ancient feel about it. Large trees felled by storms or old age lay about the forest floor as snowflakes float silently down through the canopy. There is only a gentle breeze at the current elevation, but Kentaro says that we are currently protected by the ridges and that the wind will be much stronger as we climb higher.

The pace set by the lead guide Kentaro was actually quite pleasant and reasonable. There is absolutely no need to rush, I realised, so I was able to fully appreciate the environment around me. From time to time I would stop when a gust of wind came through, just to listen for the whistle through the trees and enjoy the natural surroundings. For me that was the best part.

We climbed for another 2 hours roughly before we had a short break, during which, guides Kentaro and Sam practiced pitching a snow shelter and then digging a snow test pit. It was interesting to see the methods for snow testing. A pit about 1.5 meters deep was cut and the sides carefully shaved in order to see the separate layers in the snow pack. The guides took readings and notes for about 20 minutes before we continued our hike.

We got another half an hour in to the hike before the weather and wind started to pick up substantially. Kentaro made the call to ski back down. We had made it to the top of the tree line, which was quite good progress, but I was a little disappointed that we could not reach the summit. That said, I do have a good understanding of all the risks involved and it was definitely the right thing to do. The wind at higher altitudes on Yotei can pick up quite quickly and can be fairly strong, which can usher in fast changes in the weather.

The three of us remove the skins from our skis, and I piece back together my split board. I drop in first into the wind blown powder below us and put in some great turns before stopping to get some photos of the guides. The wind was strong and visibility was low, but I could tell that Kentaro and Sam had some big smiles on their faces as well. Just goes to show that skiing never gets old.

The descent was quite fun and took us about 10 minutes. Had we hiked to the summit, we could expect a descent time of about 20 – 25 minutes. I really enjoyed flying through the forest putting in deep turns and bouncing from pillow to pillow. It felt nice having appreciated the landscape on the way up so that I could shoot past it on the way down. We skied all the way back to the car and pulled up with big smiles on our face and an experience that I’m sure I’ll never forget.