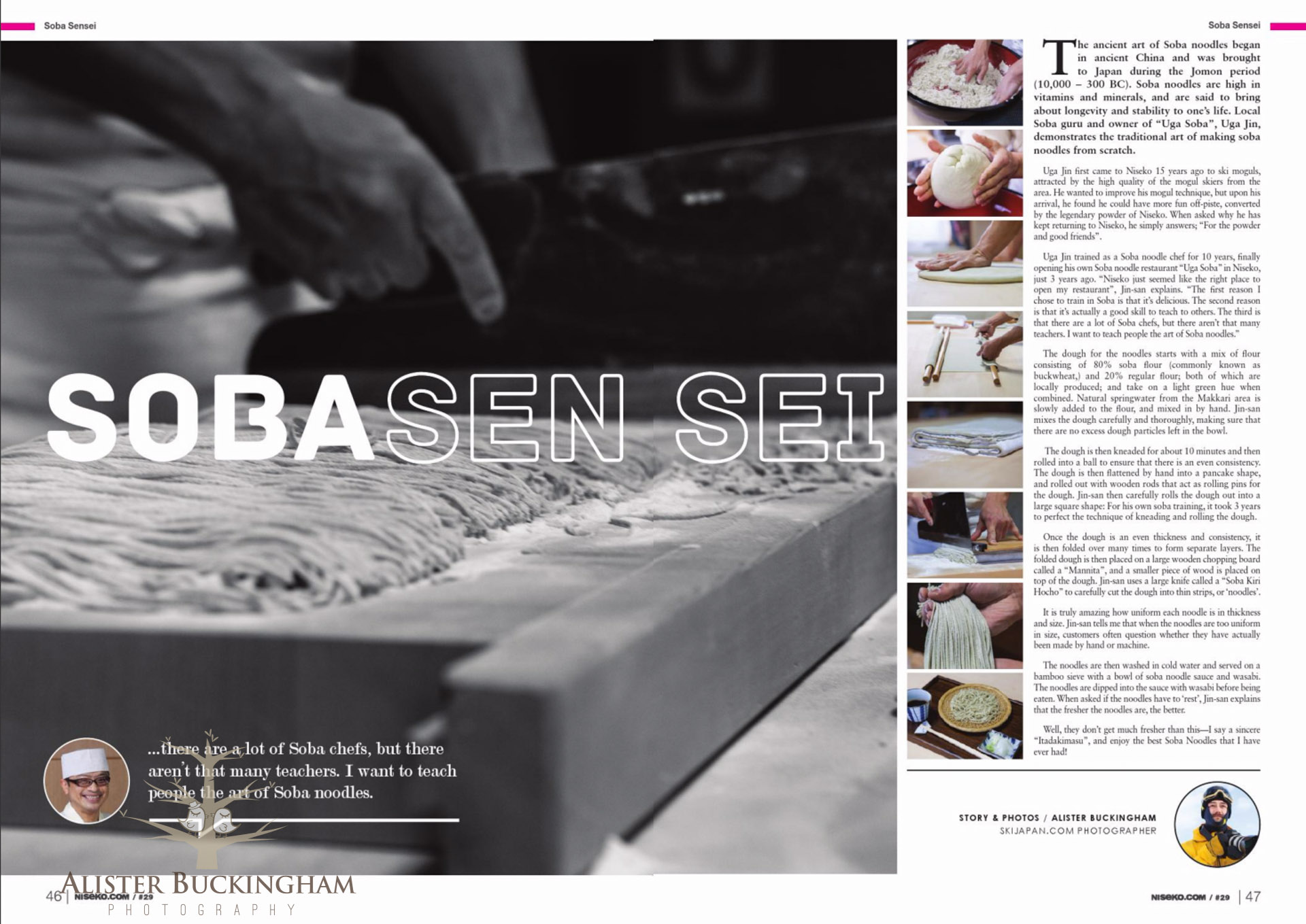 This was an article I wrote for Niseko.com Magazine Issue 29 | Feb/March 2016.

The ancient art of Soba noodles began in ancient China and was brought to Japan during the Jomon period (10,000 – 300 BC). Soba noodles are high in vitamins and minerals and are said to bring about longevity and stability to one’s life. Local Soba guru and owner of “Uga Soba”, Uga Jin, demonstrates how to properly make soba noodles from scratch.

Uga Jin first came to Niseko 15 years ago to ski moguls, due to the high quality of mogul skiers from this area. He wanted to improve his mogul technique, but when he got here he found he could have more fun off piste and so he escaped to the legendary powder of Niseko. When asked why has he kept returning to Niseko, he simply answered “For the powder and good friends”.

Uga Jin trained as a Soba noodle chef for 10 years and opened his Soba noodle restaurant “Uga Soba” in Niseko just 3 years ago. “Niseko just seemed like the right place to open my restaurant”, Jin San explains. “The first reason I chose to train in Soba is that it’s delicious. Second reason is that it’s actually a good skill to teach to others. Third reason is that there are a lot of Soba chefs, but there aren’t that many teachers. I want to teach people the art of Soba noodles”.

The dough for the noodles starts with a mix of flour consisting of 80% soba (commonly known as buckwheat) and 20% regular flour; both of which are locally produced. The flour mix actually has a light green color. Natural spring water from the Makkari area is slowly added to the flour and mixed in by hand. Jin San mixes the dough carefully and thoroughly, making sure that there is no left over dough particles in the bowl.

The dough is then kneaded for about 10 minutes and then rolled into a ball to make sure that there is an even consistency. The dough is then flattened by hand into a pancake shape, and rolled out with wooden rods that act as rolling pins for the dough. Jin San then carefully rolls the dough out into a large square shape. Jin San says that for the kneading and rolling of the dough, he had to train for 3 years.

Once the dough is an even thickness and consistency, it is then folded over many times to form separate layers. The folded dough is then placed on a large wooden chopping board called a “Manieta”, and a smaller piece of wood is placed on top of the dough. Jin San uses a large knife called a “Soba Kiri Hocho” to cut the dough into thin strips, which are the noodles.

It amazes me how uniform each noodle is in thickness and size. Jin San says that if the noodles are too uniform in size, customers will question whether the have actually been made by hand or machine.

The noodles are then washed in cold water and served on a bamboo sieve with a bowl of soba noodle sauce and wasabi. The noodles are dipped into the sauce with wasabi and then eaten. When asked if the noodles have to ‘rest’, Jin San explains that the fresher the noodles are, the better. Well, they don’t get much fresher than this, so I say “Itadakimasu” and enjoy the best Soba Noodles that I have ever had.